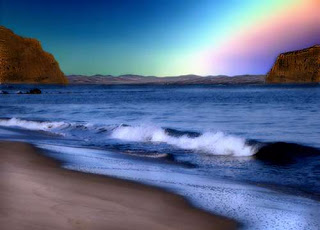 She was driving aimlessly, desperate to breathe the air of freedom. If she stayed there even for a minute she might have lost her composure and exploded. She chanced upon this place, a cliff overlooking the beach.

It was the last straw. His infidelity shattered her fragile self-esteem.

She glimpsed at her rearview mirror and saw a stranger.

Tears were falling down her cheeks drowning her sorrows. She couldn’t help but howl her pain into nothingness. She could hear her weeping echoing back.

Where is the person that she longed to be? She could not recognize the stranger staring back at her.

Her eyes were like hollow pockets of dark circles. They were supposed to be the windows to her soul. But now, it is like an abyss so deep it seems that no one can fathom its depths anymore.

Can her soul swim back to the surface and resuscitate her out of this lifelessness?

Her sobs turned to hiccups and her crying momentarily stopped. She heard raindrops falling on the hood of her car.

It was just a drizzle but it created a rainbow on the other side of the mountain adjacent to where her car was parked.

A smile formed on her gloomy face.