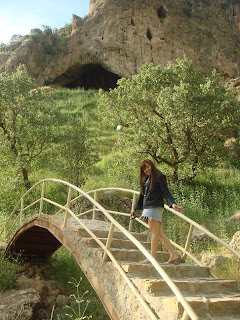 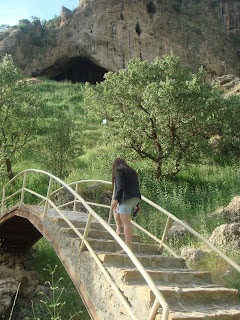 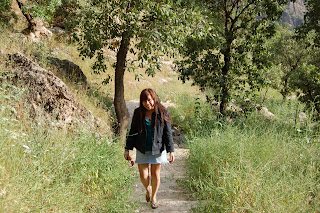 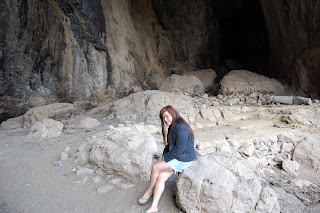 When I first arrived here in Kurdistan, someone brought me and my friend Vevey to Shanidar Cave. Below are the interesting facts that I have read from wikipedia about Shanidar Cave.
Source -- Wikipedia
The cave site of Shanidar is located in the Zagros Mountains of Kurdistan in Iraq. It was excavated between 1957-1961 by Ralph Solecki and his team from Columbia University and yielded the first adultNeanderthal skeletons in Iraq, dating between 60-80,000 years BP.The excavated area produced nine skeletons of Neanderthals of varying ages and states of preservation and completeness (labelled Shanidar I - IX). The tenth individual was recently discovered by M. Zeder during examination of a faunal assemblage from the site at the Smithsonian Institution. The remains seemed to Zeder to suggest that Neandertals had funeral ceremonies, burying their dead with flowers (although the flowers are now thought to be a modern contaminant), and that they took care of injured individuals. One skeleton and casts of the others at the Smithsonian Institution are all that is left of the findings, the originals having been dispersed in Iraq.[1]

The upper layers of Shanidar belong to protoneolithic agricultural culture probably identical to that of Karim Shahir[2][3][4].

Shanidar is at risk of being flooded by the impounding of the Bekhme Dam which is currently unfinished.

The Shanidar Cave site is most famous for having two skeletons, I and IV. Shanidar I was an elderly Neanderthal male known as Shanidar I, or ‘Nandy’ to its excavators. He was aged between 40-50 years, which was considerably old for a Neanderthal, equivalent to 80 years old today, displaying severe signs of deformity. He was one of four reasonably complete skeletons from the cave which displayed trauma-related abnormalities, which in his case would have been debilitating to the point of making day-to-day life painful. At some point in his life he had suffered a violent blow to the left side of his face, creating a crushing fracture to his left orbit which would have left Nandy partially or totally blind in one eye. He also suffered from a withered right arm which had been fractured in several places and healed, but which caused the loss of his lower arm and hand. This is thought to be either congenital, a result of childhood disease and trauma or due to anamputation later in his life. The arm had healed but the injury may have caused some paralysis down his right side, leading to deformities in his lower legs and foot and would have resulted in him walking with a pronounced, painful limp. All these injuries were acquired long before death, showing extensive healing and this has been used to infer that Neanderthals looked after their sick and aged, denoting implicit group concern. Shanidar I is not the only Neanderthal at this site, or in the entire archaeological record which displays both trauma and healing.

Shanidar II was an adult male, who evidently died in a rock fall inside the cave, as his skull and bones were crushed.[2]

There is evidence that Shanidar II was given a ritual send-off: a small pile of stones with some worked stone points (made out of chert) were found on top of his grave. Also, there had been a large fire by the burial site.

Shanidar III, another adult male, was buried in the same grave as Shanidar I and II. Shanidar III also suffered from a degenerative joint disorder (DJD) in his foot, which would have resulted in painful, limited movement. He also shows signs of arthritis. Research in 2009 suggests that Shanidar III may have been killed by a modern human (Homo sapiens), which led researchers to believe that there could have been inter-species aggression between the two groups.[5]

Of all the skeletons found at the cave, it is Shanidar IV which provides the best evidence for Neanderthal burial ritual. The skeleton of an adult male aged between 30-45 years was discovered in 1960 by Ralph Solecki and was positioned so that he was lying on his left side in a partial fetal position. Routine soil samples which were gathered for pollen analysis in an attempt to reconstruct thepalaeoclimate and vegetational history of the site from around the body were analysed eight years after its discovery. In two of the soil samples in particular, whole clumps of pollen were discovered in addition to the usual pollen found throughout the site and suggested that entire flowering plants (or at least heads of plants) had entered the grave deposit. Furthermore, a study of the particular flower types suggested that the flowers may have been chosen for their specific medicinal properties. Yarrow, Cornflower, Bachelor's Button, St. Barnaby's Thistle, Ragwort or Groundsel, Grape Hyacinth, Joint Pine or Woody Horsetail and Hollyhock were represented in the pollen samples, all of which have long-known curative powers as diuretics, stimulants, astringents as well as anti-inflammatory properties. This led to the idea that the man could possibly have had shamanic powers, perhaps acting as medicine man to the Shanidar Neandertals. However, recent work into the flower burial has suggested that perhaps the pollen was introduced to the burial by animal action as several burrows of a gerbil-like rodent known as the Persian Jird were found nearby. The jird is known to store large numbers of seeds and flowers at certain points in their burrows and this argument was used in conjunction with the lack of ritual treatment of the rest of the skeletons in the cave to suggest that the Shanidar IV burial had natural, not cultural origins.